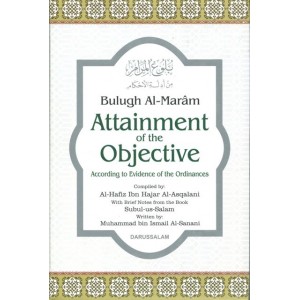 Attainment of the objective - Bulugh Al-Maram

Verlanglijst Product vergelijk
Klantervaringen
Omschrijving Specificatie Beoordelingen (0)
In this book, Allama Hafiz Ibn Hajar Asqalani has recorded the true significance of almost each Hadith, thus making it more valuable and useful in many respects. He has also mentioned the origins of the Ahadith and made a comparison of the versions in case the source are more than one. One more distinctive feature, along with others, is that the versions have also been shortened to present just the main purpose of the Hadith according to its classification under the chapter. Because of these preferential qualities, Bulugh Al-Maram has been accepted widely and is among the most sought after books of Ahadith.