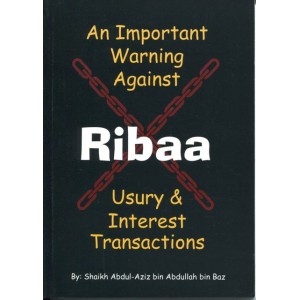 An important warning against Ribaa

Verlanglijst Product vergelijk
Klantervaringen
Omschrijving Specificatie Beoordelingen (0)
This is a short rebuttal of a research written by Dr. Ibraahim bin Abdullah AnNaasir, in which he tried his best to show the permissibility of most types of Ribaa (usury and interest) transactions that have appeared in recent times in the numerous financial institutions of the world. Hence, we thought English speaking Muslims would benefit from this translated response by Shaikh Abdul-Aziz bin Abdullah bin Baz, one of the noted scholars of our time and a staunch supporter and defender of the Manhaj of the Righteous Predecessors (As-Salaf As-Saalih). Shaikh Ibn Baz's response is a refutation of the misguided effort of Dr. Ibraahim An-Naasir to allow Ribaa transactions.